Class of 2022 Celebrates a Successful Journey at 62nd Annual Commencement

Stony Brook University’s Class of 2022 completed one journey and began another at the 62nd annual commencement ceremony on Friday, May 20, at Kenneth P. LaValle Stadium.

The university conferred a record number of bachelor’s degrees — 4,670 — among the 7,610 degrees presented overall, breaking the record of 4,645, set last year. There were also 2,095 master’s degrees, 585 doctoral and professional degrees and 260 certificates conferred at the ceremony. Graduates represented 45 states and 68 countries, and ranged in age from 19 to 71.

The commencement celebrations also included 43 individual departmental convocation ceremonies at various locations across campus, held May 18 through May 20.

With music from the Spirit of Stony Brook Marching Band providing the backdrop, the main commencement ceremony began under sunny skies, before hundreds of proud family and friends. The band’s drumline and color guard led the procession, followed by Richard Larson, president of the University Senate, accompanied by Wolfie. Faculty, doctoral candidates, master’s candidates and bachelor’s candidates filed onto the field, ending with the platform party, consisting of university leadership and honored guests.

Larson opened the ceremony, and the Stony Brook Vocalists a capella group sang a stirring version of the National Anthem. 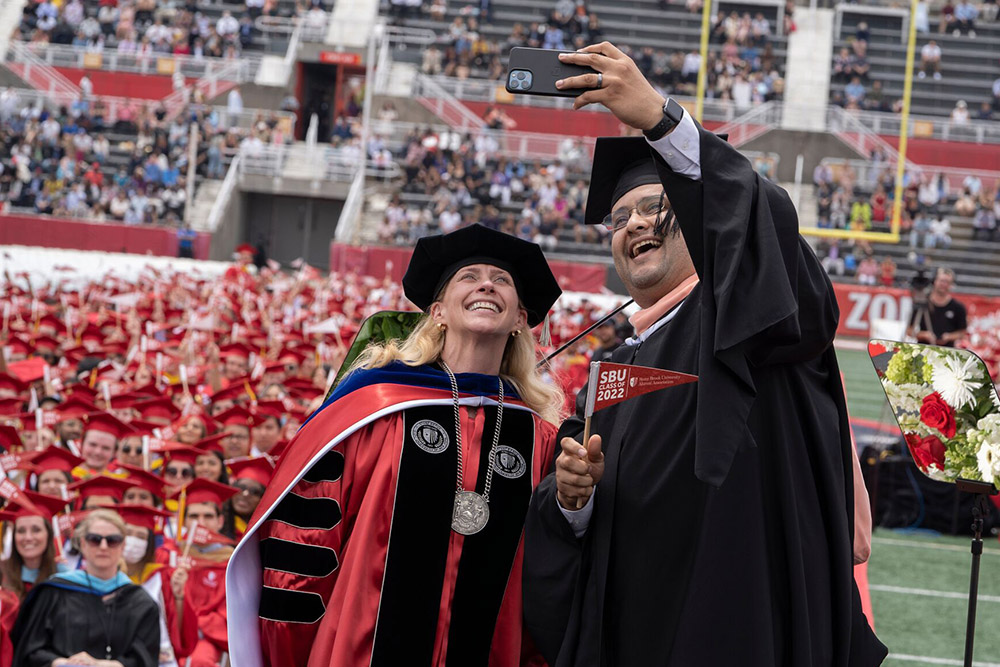 Schumer congratulated the entire community for helping make the university what it is today. “You have made Stony Brook University one of the finest institutions of higher learning, not just in New York State or the United States, but the entire world,” said Schumer, advising the graduates to follow their heart. “Don’t fear the unknown. Embrace it, relish it, and cast aside your fears. My advice for the Class of 2022 is simple: Go for it!”

Meeting the Challenges of Tomorrow: The SBU Class of 2022

In her commencement address, President McInnis called Stony Brook one of the most creative universities in the country, one recognized by the governor and SUNY as a flagship institution. She referred to the graduates’ “unexpected journey of epic proportions,” particularly the last two years, where they “had to be especially creative in how they learn, how they communicate, even in how they think.”

“As the graduating Class of 2022, your creativity was called upon in a time of great challenges, at a critical point in our collective history, and you answered that call with grace, determination, and ambition,” McInnis said. “You are standing here today, ready to graduate from one of the most distinguished universities in the world. Your commencement is proof of your deeply creative and collaborative talent. This is the quality that the world will look for as you forge ahead into the future — a future painted with hope and innovation, along with numerous urgent challenges in climate change, housing, education, sustainability, and diversity and equity. We will need your collaborative work ethic, your diverse perspectives, and your creative spirit to meet the challenges of tomorrow head on.”

Film director Todd Haynes, one of the top independent filmmakers in the world, received an honorary Doctor of Fine Arts degree. Haynes, who has had a long and award-winning professional partnership with producer and Stony Brook MFA in Film Artistic Director Christine Vachon, is a groundbreaking independent filmmaker whose award-winning career spans four decades and seven feature films. Considered American cinema’s most prominent gay directorial voice, Haynes was honored for all he has done for the arts, the LGBTQ community and Stony Brook University students.

Haynes acknowledged the remarkable teachers who gave him the tools to face the challenges in his own life that members of the Class of 2022 continue to meet today. “You deserve to feel as optimistic and inspired as I did at your age,” Haynes said, thanking the university for honoring him at the ceremony. “You have made me and my dad very proud.”

Christopher Jean, the vice president of student life for the Undergraduate Student Government, presented the Class Legacy Gift of more than $10,670 to the Stony Brook Foundation. 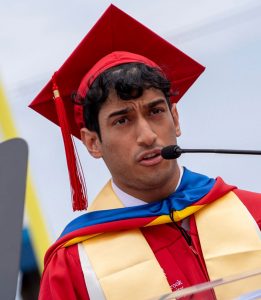 Biology major Ahmad Syed addressed his fellow graduates as the student speaker, the second person in his family to serve in that role; his brother, Ali, delivered the address eight years ago. All three Syed siblings attended Stony Brook.

Syed, from Port Jefferson, NY, served on the Dean’s Student Advisory Council in the College of Arts and Sciences, and was awarded the Louise Guarneri Scholarship. He spoke about his mother immigrating to the U.S. and how she has been such an inspiration to him and his brothers.

Ahmed Belazi, president of the Alumni Association, welcomed the members of the Class of 2022, who join more than 210,000 Stony Brook University alumni worldwide.

The Stony Brook Vocalists returned to sing the alma mater “Sandy Shore,” followed by the presentation of candidates by the university deans, and finally, the conferral of degrees by President McInnis.