Claire Garfield ’20 has been awarded the Marshall Scholarship, one of the most prestigious academic honors available to U.S. undergraduates. The ultra-selective scholarship is granted annually to 50 outstanding seniors identified as future leaders in their fields and finances two years of study at the most distinguished universities in the United Kingdom. 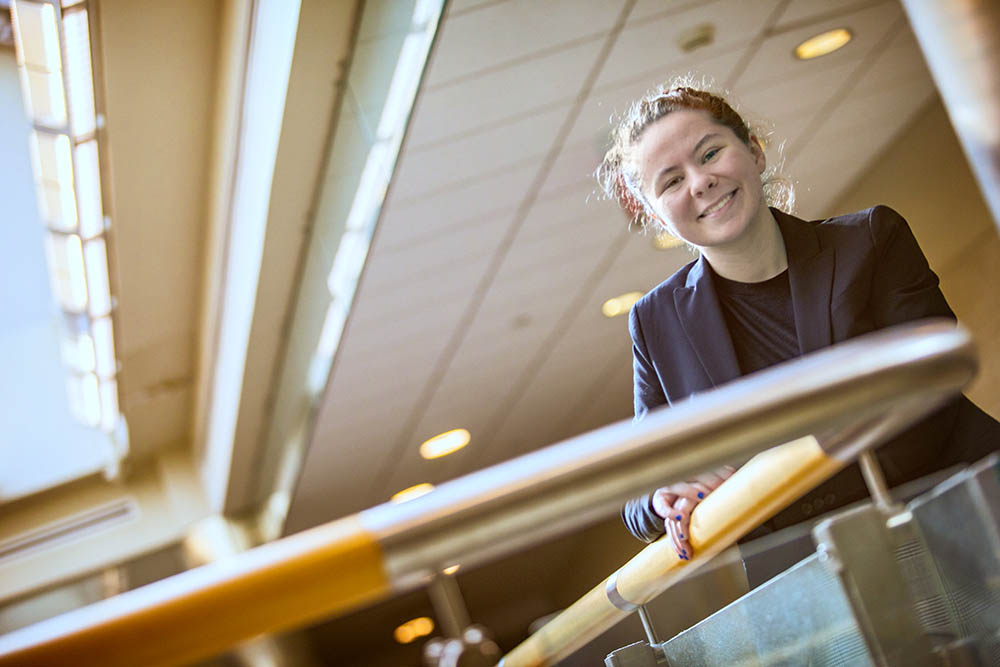 Garfield is only the second Marshall Scholar in Stony Brook history; the first, Melissa Friedman, was named in 2005.
“Claire Garfield’s receipt of the Marshall Scholarship is a testament to her distinguished academic career at Stony Brook,” said Stony Brook University Interim President Michael A. Bernstein. “Our campus community is tremendously proud of her achievement.”
For biology major Garfield, the Marshall caps a high-powered academic career that also includes a Barry Goldwater scholarship and a DAAD-Rise Fellowship. She will pursue two master’s degrees while in the UK. The first will be in Algae Biotechnology, Biology and Ecology at University of the Highlands and Islands, Scottish Association for Marine Science (UHI-SAMS). The second will be determined at a later date.
“Practically speaking, the Marshall Scholarship, my time in the UK and the alumni network will open up career opportunities,” Garfield said. “I’ve always wanted to do something really adventurous like living abroad, and now I’ll get to spend two years in one of the most beautiful places in the world.”

“Claire is not just a brilliant scholar, she is also incredibly proactive when it comes to her education, as demonstrated by the breadth of research experiences she has pursued,” said External Fellowships Advisor Jennifer Green. “She is also committed to obtaining the most comprehensive education possible, which led her to minor in French and participate in a variety of overseas academic programs, several of which were focused on the humanities.”
The Marshall Scholarship was originally created by the Parliament of the United Kingdom in 1953 as a living gift to the United States in recognition of the generosity of Secretary of State George Marshall and the Marshall Plan in the wake of World War II. The goal of the scholarship, in Marshall’s words, was to strengthen the critical relationship between the U.S. and the U.K. for “the good of mankind in this turbulent world.”
Part of her role as a Marshall recipient will be serving as a cultural ambassador between Stony Brook and the U.K. It is a role for which Garfield is well-suited, and one she looks forward to.

“Being a cultural ambassador is about being open-minded about learning and ready to use the resources and perspectives that you’ve been given to help everyone around you,” she said. “I really want to do some volunteer work in Scotland’s beautiful national parks in my free time. Getting the public engaged in conservation is the key, and public land facilitates that.”
After her studies, Garfield plans on pursuing a career in biological oceanography, specifically, studying microbial ecology and chemical ecology. Claire’s interest in the ocean began very early in her childhood, nurtured by annual family vacations to a little town on the New Jersey shore called Ocean Grove. Her parents also instilled a love for travel, fueled by trips to France — her mom is a dual citizen of France and the U.S. – and stories of her father’s travels to Guatemala and the Dominican Republic.
Garfield credits her mother, an alumna, with inspiring her to enroll at Stony Brook.  “SBU did a lot for my mom and she took her education to go to law school and work in family law,” she said. “Now she makes the world a better place every day. I really want to be like her in that respect. Also, SBU has great research, a fantastic and welcoming marine science program, and was affordable.”
In addition to her parents, Garfield cites research mentors Jackie Collier, associate professor at the School of Marine and Atmospheric Sciences (SoMAS), SoMAS graduate student Kylie Langlois, Jana Isanta-Navarro (University of Konstanz, Germany), Frank Stewart (Georgia Tech) and high school mentor Kiyoko Yokota (SUNY Oneonta) for guiding her along her current academic path.
“They’ve really helped me find my place in science and find a way to contribute to things that I think are important,” Garfield said. “The work that I’m pursuing with Jackie Collier and Kylie Langlois keeps me motivated and reminds me of all the good things that science can do for the world. I’ve been surrounded by really amazing professors and friends here. That’s the reason any of this happened.”
“This is a great opportunity for Claire, providing her with a chance to build valuable skills and experience plus personal and professional connections,” Collier said. “I don’t know a better student to send out into the world to represent SBU; Claire is among our best and brightest, and this is another step on her road to doing great things that will make us even more proud of her than we already are.”
Garfield intends to pursue a PhD in biological oceanography with the goal of one day becoming a professor.
“I really want to make my work count,” she said. “Part of that for me is doing research on problems that need an answer, but another part of that is communicating science to stakeholders and to students. It’s important to share knowledge. You never know if your student will offer the next big insight and totally change the game.”
— Robert Emproto