Stony Brook’s Black History Month celebrations began in full-flavored fashion on February 6 with a presentation by Chef Kwame Onwuachi from BRAVO’s “Top Chef” program. He joined a ballroom full of fellow celebrants at this year’s opening ceremony, which was co-hosted by the Faculty Student Association and the Black History Month Committee.
After a pouring of libations – a ritual offering – Jarvis Watson, Interim Chief Diversity Officer at Stony Brook, opened the event by introducing the dignitaries in attendance and offering his opening remarks. 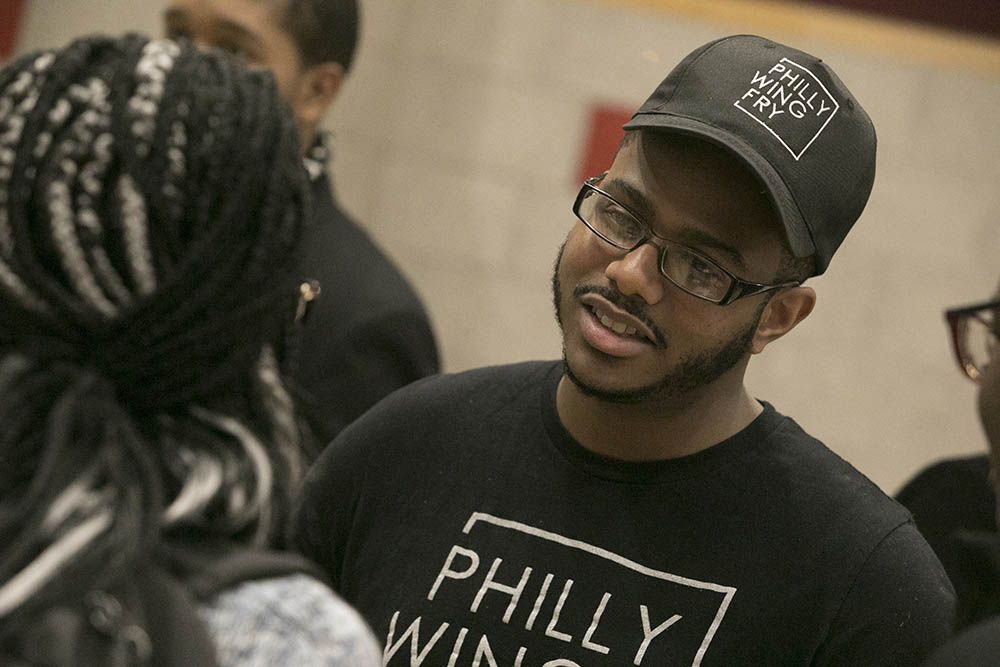 “This year’s theme is ‘Blackness is Endless,’” said Watson. “The start of slave trade was 1619. We’ve survived 400 years because of the resilience of our ancestors, and we celebrate 1619 because it’s the reason we’re here today. We’re here to honor those that came before us, and take advantage of the opportunity to be great today.”
Zebulon Miletsky, assistant professor of Africana Studies, then took the podium.
“What does Black History Month mean? It means community, it means coming together,” he said.  “One of the themes this year is black migrations. Today we’re going to talk about how food and culture migrate, not just from the south to the north, but from Africa to here.”
After the opening remarks, the Stony Brook Gospel Choir performed “Lift Ev’ry Voice and Sing,” often referred to as the Black National Anthem. After the opening observances it was time for the main course as Top Chef alum Kwame Onwuachi took a seat on the stage to share his story. He began by telling the crowd what Black History Month means to him.
“It’s important that we know our culture and what we’ve done to get to this point,” said Onwuachi.  “It’s a reminder that we should be celebrating ‘Blackness Is Endless’ all year long.”
He then told the story of a culinary journey that stretched from Long Island to the Bronx and Nigeria.
“In the South Bronx and it was easy to get on the wrong path,” he said. “I was definitely going down the wrong path, and my mom wanted to get me off that path. So I got sent to my grandparents in Nigeria and my mom told me I wasn’t coming home until I learned respect. I was there for two years.”
Those two years proved to lay a solid foundation for the future chef. Though he admits he didn’t appreciate it at the time, while in Nigeria, he discovered the deep cultural roots of the food he grew up with, and today describes his menus as “autobiographical.”
“Every dish should tell a story,” he said. “You’re looking to sell a memory. Make sure what you are creating represents you.”

Though Onwuachi did not win the Top Chef competition, investors saw potential in the young culinary artist. Those connections would eventually lead to his opening  Afro-Caribbean cuisine hot-spot Kith and Kin and Philly Wing Fry, fast-casual restaurants inside a Washington, DC Whole Foods location. He is executive chef for both.
“I wanted to create a menu that reflected my roots,” says Kwame. “Kith & Kin is an old expression that literally means ‘Friends & Family.’”
And the “family” part shouldn’t be understated ­­– when it came time to create dishes, Onwuachi would call his mom or grandparents. “This is my Thanksgiving on a menu,” he said.
The spoonful of fame Top Chef brought would open other doors as well. After finding himself next to Jon Favreau, speechwriter for then President Barack Obama and Vice President Joe Biden, at a Washington Wizards basketball game, Onwuachi got the extraordinary opportunity to cook for the Obamas at the White House.
Before closing, Kwame offered some words of wisdom that extend well beyond the kitchen.
“Follow your dreams. Whatever wild or crazy dream you have, follow it,” he said. “I had an end goal in mind and I didn’t care what people thought.  Surround yourself with good people, put your head down and get to work.”
Afterward, attendees had the opportunity to sample one of Kwame’s signature recipes — curry chick peas.
This event was the first of several on campus as Stony Brook honors Black History throughout February and it was made possible through a collaboration with the Black History Month committee, the Faculty Student Association, Office of the Chief Diversity Officer, Office of Multicultural Affairs, and CulinArt Group.