Cernadas-Martín Is a Champion for Marine and Human Diversity 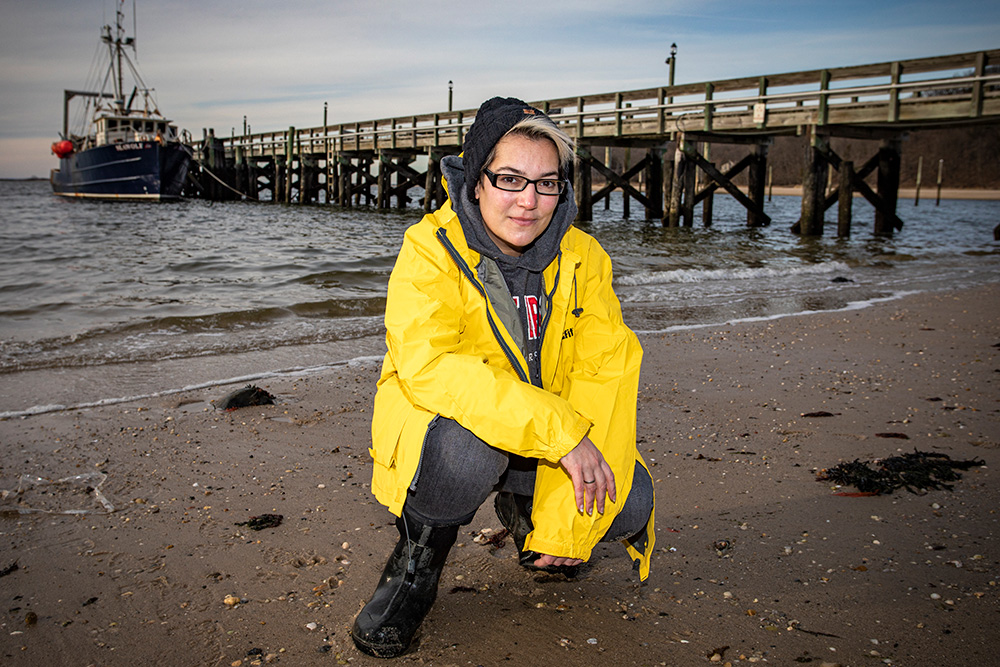 Sara Cernadas-Martín with the research vessel Seawolf behind her. Photo by John Griffin

Sara Cernadas-Martín is a self-described interdisciplinary scientist with knowledge spanning the fields of marine biology, molecular genetics, and conservation ecology, with an MS and a PhD from Stony Brook University.
Beyond her passion for studying and preserving the diversity of marine life in our local waters, Cernadas-Martín is equally as dedicated to fostering diversity within the human race, making her the ideal person to serve as co-chair for the School of Marine and Atmospheric Science (SoMAS) Diversity, Equity and Inclusivity Committee.
“As an Hispanic scientist, I am committed to increasing diversity on campus and making an extra effort to promote higher education within the Hispanic community and other underrepresented racial, ethnic and social groups,” Cernadas-Martín said. “Hispanics are highly underrepresented in undergraduate and graduate schools in America, which is especially discouraging when considering that the Hispanic population is the largest ethnic minority group in the country. I strongly believe that having a diverse student body benefits everyone involved.”
For her master’s project, Sara studied the distribution of ammonia oxidizing bacteria in the Cariaco Basin near Venezuela, an oxygen minimum zone with a permanently anoxic (oxygen-depleted) deep layer, under the supervision of Professor Gordon Taylor. Her PhD thesis focused on the multidisciplinary ecological characterization of summer flounder (Paralichthys dentatus) in Shinnecock Bay using acoustic telemetry, diet analysis and otolith (“earstones” in bony fishes) microchemistry under the supervision of Professor Ellen Pikitch.
Cernadas-Martín is currently working with the Institute for Ocean Conservation Science (IOCS) as a senior postdoctoral associate at Stony Brook, where her work focuses on managing the research component of ShiRP fisheries (Shinnecock Bay Restoration Program) and establishing a new environmental DNA program for tracking fish species richness in the South Shore Long Island estuaries.
In 2019, Cernadas-Martín was also selected as the recipient of the distinguished Nuria Protopopescu Memorial Teaching Award, presented annually to a graduate student based on demonstrated excellence in teaching, innovation and creativity in instructional plans and materials, and engagement with and dedication to their students.
“Although I enjoy working with students of all backgrounds, I have always taken special interest in Latinx students, making sure they felt motivated, included and most importantly, had fun while doing science,” she said. “At first, many of these students were hesitant to be assertive while in the field or in the classroom. I came to realize, in sharing the same language, I could help students to overcome their natural timidity and become more engaged in their research and learning experience.”
Of particular interest to Cernadas-Martín is extending educational opportunities to students from diverse backgrounds, including first-generation college students, international students, and students with a wide range of educational experiences and goals. 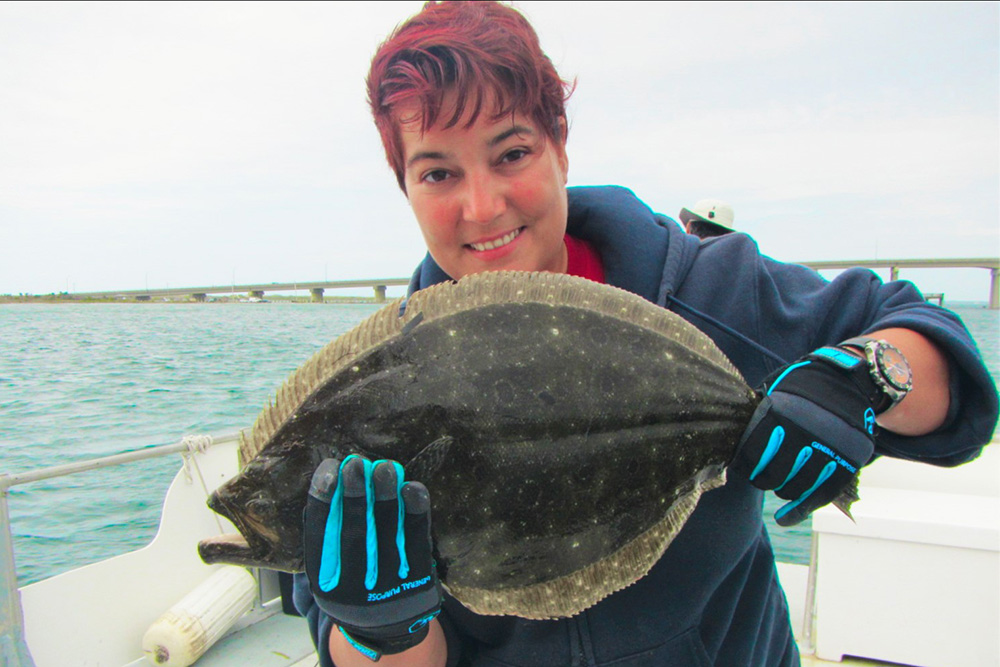 Cernadas-Martín holding a fluke near the Ponquogue Bridge, taken while performing research as part of the Shinnecock Bay Restoration Program.

Her academic achievements and community involvement, along with her focused effort on student diversity and integration, have been recognized by Stony Brook University with the prestigious W. Burghardt Turner Fellowship, a highly competitive fellowship which acknowledges the academic and research achievements of underrepresented doctoral students and requires a strong commitment to inclusivity and community development.
Another of Cernadas-Martín’s personal goals is to help improve the integration of international students into the wider academic community.
“I remember when I first got to Stony Brook University from Spain. I was in shock,” she recalled. “I was happy for having made it into graduate school, but at the same time had to deal with a language barrier and being away from my family and friends. The first few months are critical times in the life of an international student and can potentially handicap academic performance.”
Cernadas-Martín believes efficient integration is key to helping international students realize that there are opportunities in this new chapter of their lives. “During my first years of graduate school, I did my best to help improve social interactions among students in my department,” she said. “One example were the flamenco nights I hosted once a month at a Spanish restaurant open to everyone in my department, where I was able to share the culinary, musical and folkloric traditions of my culture.”
To that end, Cernadas-Martín has volunteered with the Graduate Student Club of her department as the activities coordinator, creating and running a departmental photo competition since 2012, among other undertakings.
Perhaps some of her compassion originated from her own medical struggles. As a college freshman, she overcame bone cancer, which impeded her from attending school. She recovered, but suffered a relapse in the middle of her sophomore year.
“During my graduate career I have been, once again, plagued with health issues, which included three major spinal surgeries,” she said, adding that the surgeries set back her graduation timeline and consequently constrained the ability of her research grants to cover laboratory costs and living expenses.
“However, I was lucky enough to have a few professors, family and friends who supported me and encouraged me to finish my degree,” she said. “It did take me longer than most people, but I did it. Looking back, I can’t thank those people in my life enough. I aim to be a support system for as many students as possible, motivating them to move forward despite setbacks and encouraging them to pursue their passion.”
— Glenn Jochum