The U.S. Department of Energy (DOE) has announced the selection of Brookhaven National Laboratory as the site for a planned major new nuclear physics research facility. The Lab is managed for the DOE by Brookhaven Science Associates, a partnership between the Research Foundation for the State University of New York on behalf of Stony Brook University and Battelle Memorial Institute.

The Electron Ion Collider (EIC), to be designed and constructed over ten years at an estimated cost between $1.6 and $2.6 billion, will smash electrons into protons and heavier atomic nuclei in an effort to penetrate the mysteries of the “strong force” that binds the atomic nucleus together. The facility will bring major benefits to the regional economy and offer unprecedented research opportunities to Stony Brook faculty.

“The nuclear physics group and many collaborators at Stony Brook University have long been preparing for the next frontier in nuclear science,” said Michael Bernstein, Interim President of Stony Brook University. “Once the new EIC is built, access to this magnificent resource will empower us to pursue insights to profound unanswered questions in this field. In this pivotal moment for Brookhaven National Lab, Stony Brook University, Long Island, and New York State, I extend my gratitude to Senator Chuck Shumer for his support and the Department of Energy for its selection.”
“Congratulations to all who were involved in this project, with special recognition to Professor Abhay Deshpande for leading the Stony Brook team and the global EIC effort for the last two decades,” Bernstein said.

“The construction of an electron-ion collider at Brookhaven Lab not only builds on their huge success in operating the Relativistic Heavy Ion Collider, but ensures that Long Island, including Stony Brook University, remains the epicenter for groundbreaking discoveries in physics,” said Richard Reeder, Stony Brook Vice President for Research and Associate Vice President for Brookhaven National Laboratory Affairs.

“Establishing the Electron Ion Collider on Long Island might be focused on particles, but it will add some serious mass — nearly $1 billion dollars worth — to the local economy,” Sen. Charles Schumer (D-N.Y.) said. “In addition, BNL has the talent, the technology and the track record to make the most of this national project. The lab is used to taking on big projects, critical research and the most serious questions science can pose. The Department of Energy is right to keep the momentum going and chose Long Island for the newest collider.” 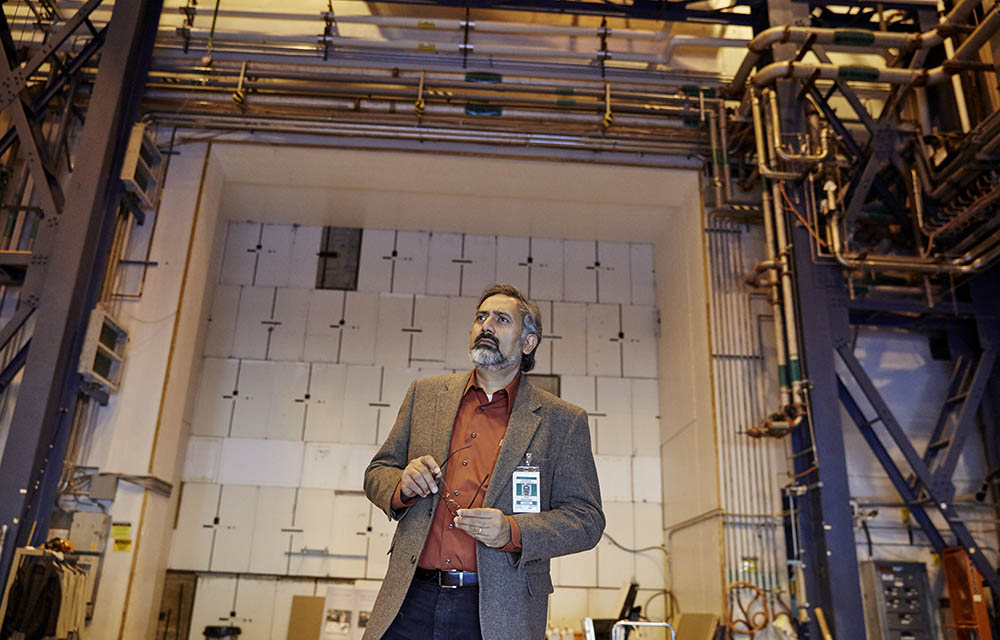 The EIC will be a game-changing resource for the international nuclear physics community.

“Hundreds of nuclear scientists will get hands-on training at the electron-ion collider. Some will continue along a career path of future scientific research,” wrote Abhay Deshpande, Professor of Physics at Stony Brook University and Director of EIC science, Brookhaven National Laboratory, in a Newsday op-ed.
“Others will move on to industry and elsewhere,” Deshpande wrote. “All will help power the nation’s engine of intellectual and economic growth.”

“The EIC promises to keep America in the forefront of nuclear physics research and particle accelerator technology, critical components of overall U.S. leadership in science,” said U.S. Secretary of Energy Dan Brouillette. “This facility will deepen our understanding of nature and is expected to be the source of insights ultimately leading to new technology and innovation.”