In a virtual Grand Rounds lecture titled “Picturing Pandemic Disease,” presented by the Center for Medical Humanities, Compassionate Care and Bioethics, Barry Coller, MD, Hon. ’03 and former Stony Brook faculty member, and Bobbi Coller, art historian and advisory board chairperson of the Stony Brook Foundation’s Pollock-Krasner House and Study Center, discussed art produced during the onslaught of three global epidemics — the Black Death in the Middle Ages, the 1918 influenza pandemic and the polio outbreak of the 20th century — placing them in historical context with the current COVID-19 pandemic.
The presentation began with a look at the Black Death, the deadliest pandemic in human history. Artists responded by creating works that provide a peek into that history. Bobbi Coller highlighted a painting called “The Triumph of Death” by Pieter Bruegel, created in 1562. The painting is a large panoramic composition that illustrates the breadth of suffering caused by the plague and a burning landscape devoid of life. 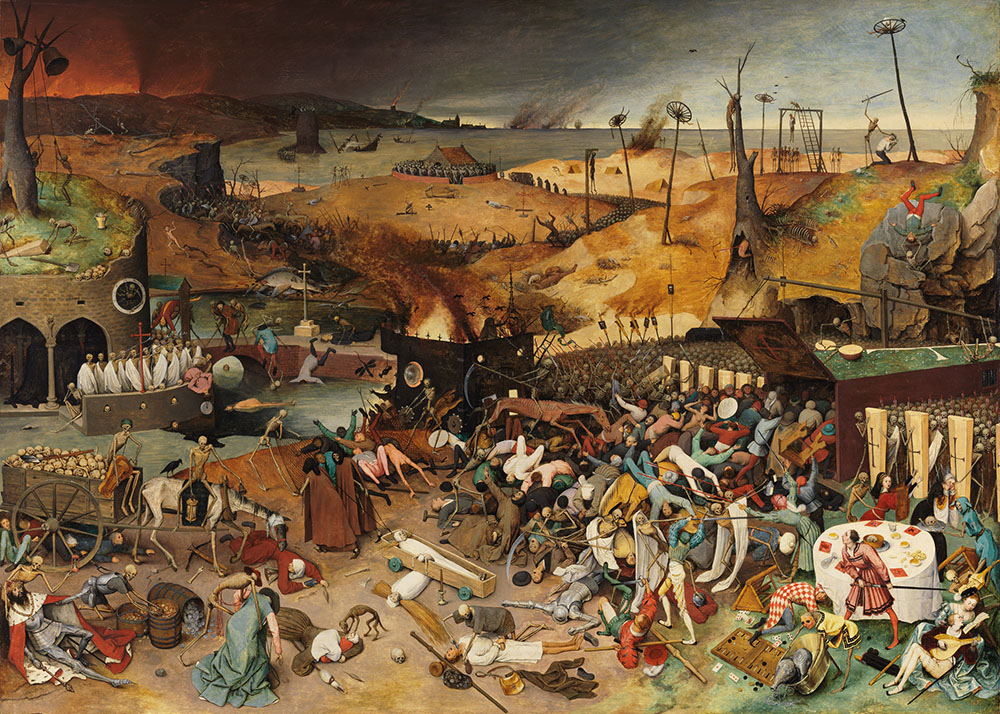 The Triumph of Death, Pieter Breugel the Elder, c. 1562

Coller noted that throughout the painting, the Black Death is personified by skeletons, specifically calling attention to the depiction of a group of card players who have interrupted their games and are fleeing. Another detail of the painting reveals why.
“A terrifying army of deadly skeletons is marching in ranks like legions of soldiers in an overpowering assault,” she said. “To this day, metaphors that compare attempts to cure disease are rooted in battle imagery. Among many familiar phrases, we ‘declare a war on cancer,’ and refer to the physicians’ arsenal of drugs and therapies to fight illness. It’s a centuries old connection graphically visualized here by Bruegel.” 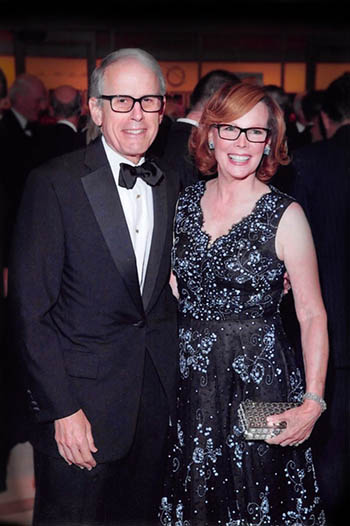 Barry and Bobbi Coller were honored at the 2020 Stony Brook Gala.

Barry Coller followed, addressing the spread of misinformation in historic pandemics.
“One of the nearly inevitable consequences of pandemics is scapegoating, often savage in its intensity,” he said. “During the Black Death, the ‘fake news’ of the time was that Jews were poisoning the wells across Europe. This news essentially went ‘viral.’”
Coller highlighted two works, the first a drawing by an unknown artist titled “The Burning of the Jews,” depicting the Valentine’s Day Strasbourg Massacre in February 1349. Another piece of art from Erfurt, Germany, in the same year, shows a mob massacring Jews with swords and clubs. Similar events occurred across Europe. In Switzerland, Zurich expelled all Jews and Basel gathered its Jews on an island in the Rhine and burned them all to death. The Basel Town Council passed a law prohibiting new Jewish settlements for 200 years.
“One hopes that by recounting this painful pandemic that history will prevent this recurrence,” he said, “but we’re already seeing the seeds germinating in our own time and can only hope that the soil won’t support their growth.” 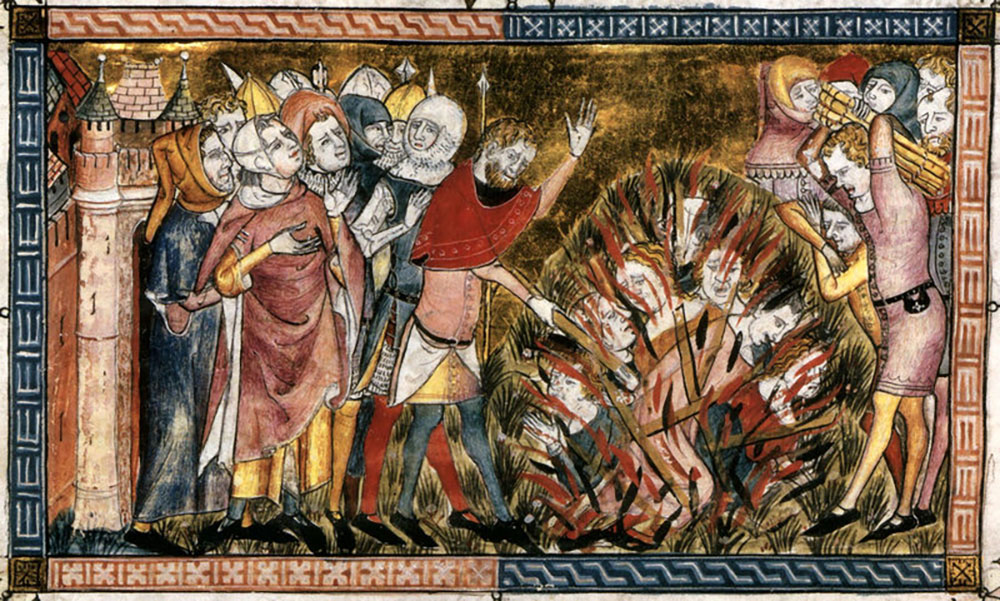 A medieval drawing of the 2,000 Jews of Strasbourg who were killed on February 14, 1349 in the Strasbourg Massacre during the Black Death persecutions.

Coller added that another nearly inevitable consequence of pandemics is the loss of civil liberties, as people are usually more than willing to forgo freedom — especially someone else’s freedom — to protect them and their families from potentially fatal illness. Coller noted that the flourishing of civil liberties in the 1950s and 1960s coincided with the control of contagious diseases with vaccinations and antibiotics.
“I believe that control of contagion is a prerequisite for the flourishing of civil liberties,” he said. “The police powers of the state in times of epidemic are enormous, and are nearly irresistible tools for unscrupulous politicians after the emergency passes.”
The Collers then moved on to more recent events, including the 1918 flu pandemic, the first such event to occur after the invention of the photograph. Unlike the studio-constructed paintings of Napoleon made years after the event, photographs from 1918 provide a firsthand record of the scale of the pandemic and attempts in America to mobilize a national response. Bobbi Coller highlighted an image of a temporary ward for influenza patients in Camp Funston in Kansas in 1918.
“This picture was meant to show how life went on, even though people had to wear masks,” said Coller. “This has a very different meaning today, given that we’re all wearing masks.”
Another photo from 1954 shows second grade children lined up to receive the polio vaccine in Memphis, Tennessee — the first large-scale administration of the polio vaccine. Coller noted that polio ravaged America for more than a century with increasingly severe outbreaks in the 1940s and ‘50s. 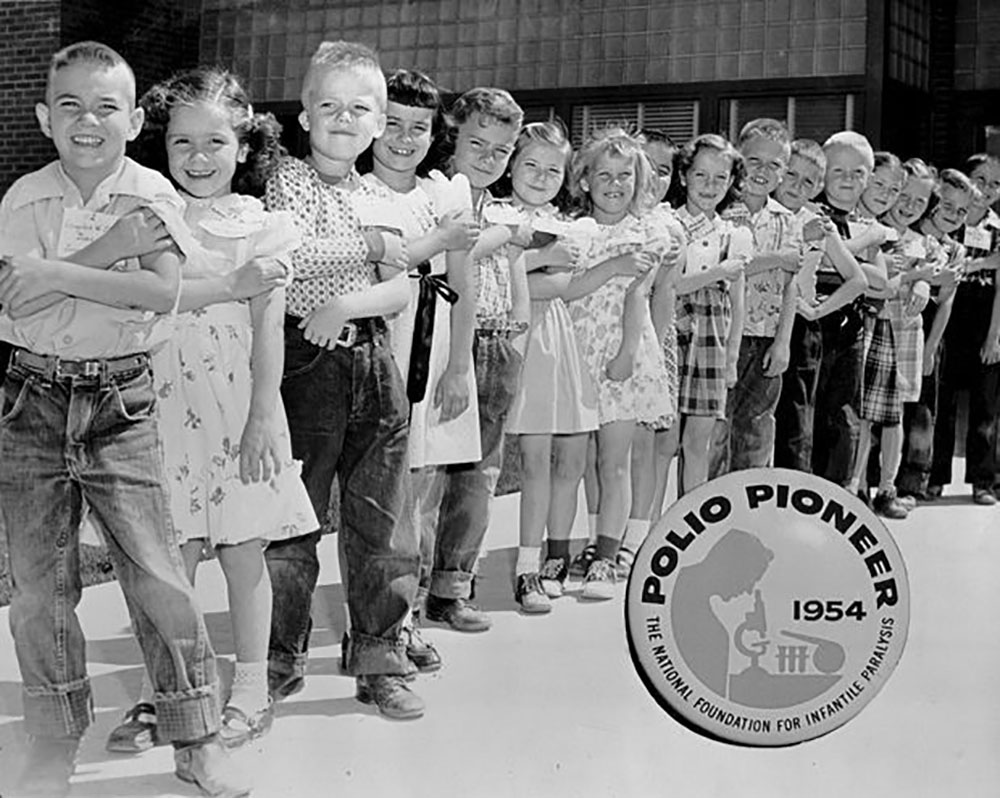 Children receiving the polio vaccine in 1954

“As a result, the Salk polio vaccine trial is a great American story,” he said. “Public support was nearly universal because of parental fear about children getting polio, and a very high level of confidence in science coming in after World War II. The announcement of the vaccine on April 12, 1955, is probably the high point in U.S. public appreciation of the power of new scientific discoveries.”
Ironically, Coller said the success of the polio vaccine perhaps unwittingly opened the door to the science denial and anti-vaccination phenomenon we see today.
“In countries where SARS had a major impact, like Singapore and South Korea, they experienced firsthand how devastating it was, and that influenced future responses to health crises,” he said. “In this country, people can deny science simply because they’ve never actually seen the tragic impact of a pandemic.”
Bobbi Coller concluded with the observation that that pandemics bring out the best in some people, and the worst in others.
“Our best response is to support good science and to use that knowledge to guide public policy,” she said. “All pandemics in history have ended, and so will this one. I think the message is that we just have to be nicer to each other because we all have to be a part of the support. I hope that we’ll be a kinder society at the end of this.”
“Medical schools have really caught on to the trend that promoting observation techniques in art is a wonderful way to teach students, and we do that here at the Renaissance School of Medicine,” said Sarah Justvig, chief resident, Department of Pediatrics, Renaissance School of Medicine at Stony Brook, who is creating an “Arts and Observation” retreat for the pediatric residents with the guidance of her mentor and program director, Robyn Blair, associate professor of Clinical Pediatrics. “Some residency programs in fields more traditionally considered observational, such as dermatology and ophthalmology, have instituted arts and observation interventions for trainees. These skills are just as crucial for pediatricians, since our patients often can’t talk to us or tell us what’s wrong or how they’re feeling. So much of how we perform our physical exams and make our diagnoses is based on what we see, and our residents need the skills to do that. Art is an excellent teacher.”
— Robert Emproto