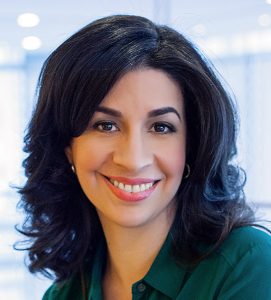 The event will be a hybrid program with in-person seating available on site and accessibility via Zoom. To attend, register here.

For more than a decade, Tanzina Vega’s journalism career has centered on inequality in the United States through the lens of race and gender. She’s been a reporter and producer for The New York Times and CNN, where her work spanned text, digital and broadcast television. She most recently spent three years as the first Latina weekday host of “The Takeaway” on WNYC, New York Public Radio.

Vega, who earned a bachelor of arts degree in sociology from Stony Brook, has covered many of the most consequential news events of the past decade, including multiple presidential elections, the COVID-19 pandemic, the rise of #BlackLivesMatter, Puerto Rico’s political crisis and the January 6 Capitol insurrection. In 2019, she was awarded the Robert G. McGruder Distinguished Lecture and Award from Kent State University. Prior to that she was a fellow at the Nation Institute and a Ferris Professor of Journalism at Princeton University. Vega is a distinguished graduate of the Craig Newmark School of Journalism at City University of New York, where she earned master’s in digital journalism.

Women’s History Month (WHM) is an annual celebration of the continuous, significant, vital contributions women have made to society, history and their respective cultures. The WHM Closing Program is presented by the Office of Multicultural Affairs and the Women’s History Month Committee.

This year’s theme is #BreakTheBias, adopted from International Women’s Day, which is held annually on the first Tuesday in March. Stony Brook’s WHM Committee is dedicated to ensuring that Women’s History Month is integrated into university life in March and throughout the year.