Armed with vast knowledge and her own personal experience, Stolnik-Lourie ’16 funded the Center that will help tens of thousands of Long Island women 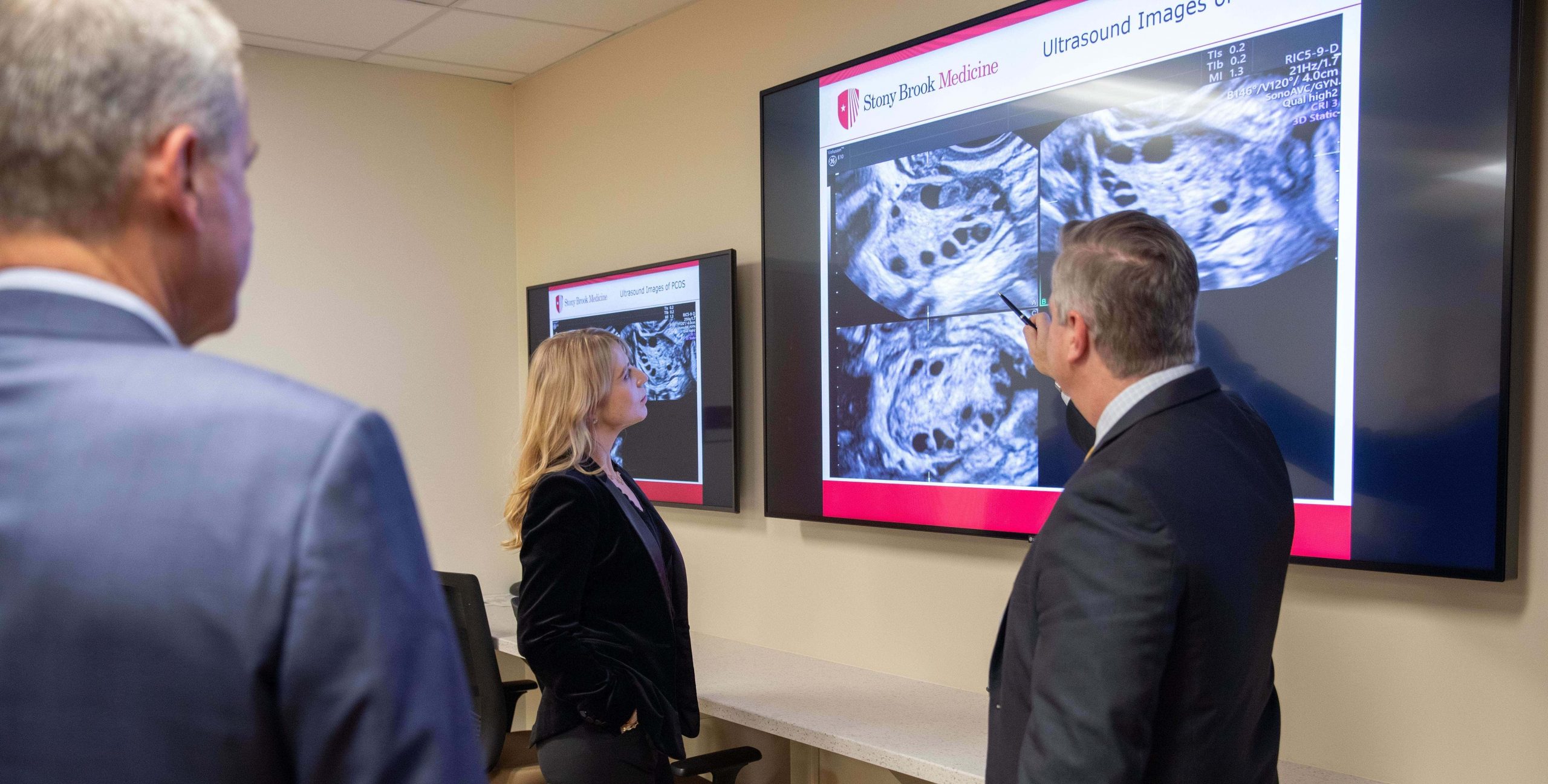 Dr. Todd Griffin, Chair of Obstetrics, Gynecology and Reproductive Medicine; Ivana Stolnik-Lourie; and Dr. Hal Paz, Executive Vice President for Health Sciences, examine ultrasound images of a patient whose ovaries demonstrate the classic appearance of polycystic ovaries – images like these are how the disease earned its name.

Ivana Stolnik-Lourie ’16 is one of an estimated 60,000 women across Suffolk County suffering from a complicated, sometimes debilitating, often misdiagnosed condition known as Polycystic Ovarian Syndrome (PCOS).
Stolnik-Lourie has suffered from PCOS since she was a young teen living in Croatia. A complicated metabolic-endocrine disorder, PCOS affects one in 10 women of childbearing age. The symptoms can have a devastating effect on a woman’s physical and mental health, from irregular periods, weight gain, acne and male pattern baldness to increased risk of uterine cancer and infertility.
For Stolnik-Lourie, PCOS has caused a wide range of symptoms. In her youth, she suffered from cystic acne, panic attacks and depression. Today, she has learned to keep many symptoms at bay by following a strict diet and committing to regular exercise and consistent sleep routines. But her journey to get here has been long.
Stolnik-Lourie left her home and family in Croatia at 24. She had planned to learn English at Stony Brook University and bring her newfound language and experience back to Croatia, where she would follow in her mother’s footsteps and build a career as an attorney. Yet, she became enchanted by Stony Brook and enrolled in the School of Journalism.
She also hoped she would find answers to her ongoing physical and emotional struggles here in America. When she was diagnosed with PCOS in Croatia, her doctors knew very little about the syndrome or how to alleviate her symptoms. “I sought help and saw the best doctors,” she says. “But I was still not getting answers.” Unfortunately, as she quickly learned, her Croatian doctors were not alone. Because of the vast range of issues that result from the disorder, little is known about its cause, and diagnosis and treatment are difficult.
“PCOS is a metabolic-endocrine disorder with a variety of potential symptoms including the presence of small ovarian cysts on ultrasound, thus its name. However, it is not just a disease of the ovaries. It is a much more complex disease that impacts all aspects of a woman’s health,” explains Todd Griffin, MD MBA, Chair of the Department of Obstetrics, Gynecology and Reproductive Medicine at Stony Brook Medicine. “The best outcomes are achieved with a strong team approach, as patients may need to see an endocrinologist, a dedicated primary care expert, an ob/gyn, a dermatologist, a cardiologist, an infertility specialist, a therapist, or others that specialize in PCOS. Since this affects women of all reproductive ages it is also important to have a team that is dedicated to the care of adolescents with PCOS.” 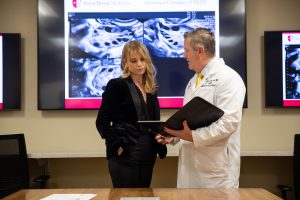 Dr. Griffin and Stolnik-Lourie discuss details about the PCOS Center for Excellence.

Stolnik-Lourie could not find such an interdisciplinary team or even independent specialists who could help her, despite her persistent searching. Becoming increasingly frustrated with the lack of information and desperate to address her own discomfort and mental anguish, Stolnik-Lourie took matters into her own hands. She drew upon her journalistic researching skills to learn as much as she could about the syndrome, became involved with nonprofit organizations dedicated to PCOS and participated in fundraising and awareness campaigns and events.
The more she learned about the condition and others suffering from it, the more she saw how alienating PCOS can be and how alone and misunderstood women can feel.
Driven by a fundamental belief that “women should be there for each other,” and armed with extensive knowledge about PCOS, she vowed to help create an interdisciplinary center dedicated to the research, treatment and awareness of PCOS – a center, as she says, “where women can go in, and every doctor knows what you’re talking about.”
Naturally, she approached Stony Brook University, her “second family” that helped transform her life from the moment she stepped foot on the campus 10 years ago.
“I truly love Stony Brook,” she says. “As an international student, so far away from everyone I knew, speaking a language that wasn’t mine, I felt so different. At Stony Brook, they accepted me with open arms, and it became home to me. I couldn’t have found a better place to be.”
Stolnik-Lourie cherishes her relationship with Stony Brook. She and her husband Robert Lourie, a former member of the Stony Brook Foundation Board of Trustees, are staunch supporters of the University and have generously supported a number of initiatives across campus. Still, this most recent philanthropic endeavor is closest to Stolnik-Lourie’s heart.
With the Polycystic Ovarian Syndrome (PCOS) Center for Excellence now officially open at Stony Brook Medicine, Stolnik-Lourie could not be happier. 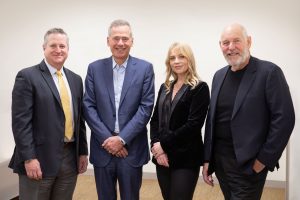 “This is my dream come true for women,” she proclaims. “It truly is an interdisciplinary center where they will understand who you are as a patient, communicate better amongst themselves and help advance good quality research in this area.”
The PCOS Center for Excellence offers a multi-pronged approach to the syndrome: clinical care, research, education, and community outreach. In addition to a broad spectrum of specialists, the clinical team is composed of a dedicated administrative leader, a nurse navigator, a nutritionist, and others who will act as both the patient’s advocate and guide throughout the process.

“The sooner you can get a diagnosis, the sooner you can start to get help,” says Dr. Griffin. “It is such a large-scale issue that we at Stony Brook want to help women get a faster diagnosis and to give them access to a team of specialists who are experts in PCOS. And we want those experts to be really sympathetic to how PCOS can impact a woman’s life.” Stolnik-Lourie is hopeful that the Center will become a game-changer for women on Long Island. But she has no plans to rest on her laurels.
“I just feel privileged to be in a position to help people,” she says humbly, as she excitedly talks about the community outreach initiatives she plans to help launch “as soon as possible.
—Kate O’Brien