“It’s my family away from my family, right? I feel like I have a really strong support system with the people that I’ve met here,” said Katherine Maier.
Katherine “Kat” Maier is known to her friends and colleagues as a nontraditional student, rockstar, prolific artist and veteran. But all those relationships wouldn’t be possible without the community she’s found at Stony Brook University, where she’s involved in multiple spheres on campus, ranging from art and advocacy, to her support of on-campus veterans services. 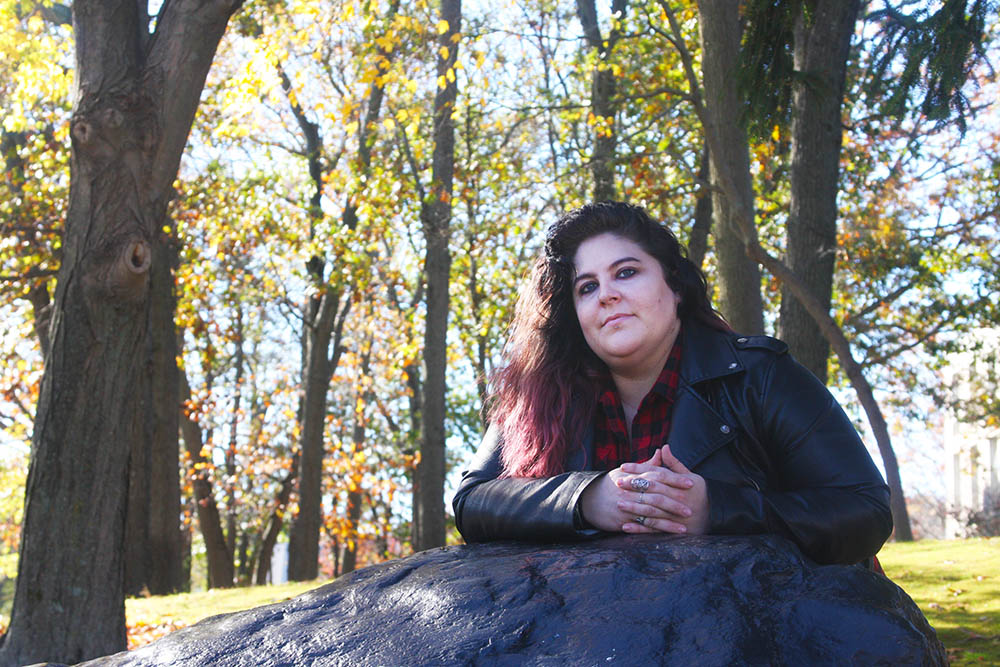 The journey to Stony Brook wasn’t easy for Kat, now a studio art major in her third semester, who came to the University after leaving the Air Force. Kat began serving in 2011 and left in 2018 for medical reasons. She vividly remembers the email informing her of her retirement. Even the smallest details stuck in her mind, including the punctuation and tone. She was frustrated and shocked that it insinuated her retirement was a joyous occasion.
The move from the Air Force to her newfound community at Stony Brook took time. As soon as she arrived at the college, Kat became as involved as she could in her classes and participated in various campus events.
“I went from a very structured environment where I knew where I fit in, to a completely new place where I wasn’t sure where I belonged,” Kat said. “It took a while, but I feel like I have gained my footing and really enjoy participating in both my classes and various events on campus.”
These efforts were not lost on her professors and advisers. Karen Levitov, professor and curator for Stony Brook’s Zuccaire Gallery, said Kat is attentive to her art and to the community in the art department. Levitov, who praises Kat as a highly versatile artist, advised her when she prepared to submit her art to be shown at the Sunwood Estate, the official residence of the University president.
“She works well in different mediums, she thinks creatively in both of those as well as different media,” Levitov said. “I think she’s doing more and more ambitious work.
Kat is also a committed member of Stony Brook’s student veteran community. Not long after coming to Stony Brook, Kat began working in the Office of Veteran Affairs.
“The real purpose is to give student veterans a place to belong on campus. She really works that to her fullest and helps others feel comfortable,” said Pam Pfeil, one of Kat’s supervisors.
In addition to her work there, she’s an advocate for better mental healthcare for active duty military and veterans.
“I struggled with my mental health when I was in active duty,” she said. “it’s still something that I struggle with. We had access to mental healthcare, but there was a negative stigma around it. I’d like to change that outlook.”
Kat is also part of a HerStory chapter on campus, working to bring more stories of combat from female veterans to the canon of wartime literature. But what Kat is best known for may be her committed spirit and dedicated work ethic, which informs everything she does, in each role she plays on campus. It’s these traits that have stuck with Cathrine Duffy, Associate Director of Student Support, as she watches Kat diligently work in the Dean of Student’s office.
“She has this demeanor that where nothing would phase her, I don’t think anything would phase her,” Duffy said. “She can handle anything you throw at her.”
— Sarah Beckford