In a well-known Billy Joel song, a composer rues the fact that his life’s work has been shortened to three minutes, five seconds to accommodate the needs of the radio business.
But even the Piano Man had more time to get his point across than the Stony Brook doctoral candidates who participated in the Three Minute Thesis (3MT) competition. In the Charles B. Wang Center on March 29, a wide range of Stony Brook doctoral candidates put subjects like neuroscience, molecular biology, literature and theater to the “three-minute” test. 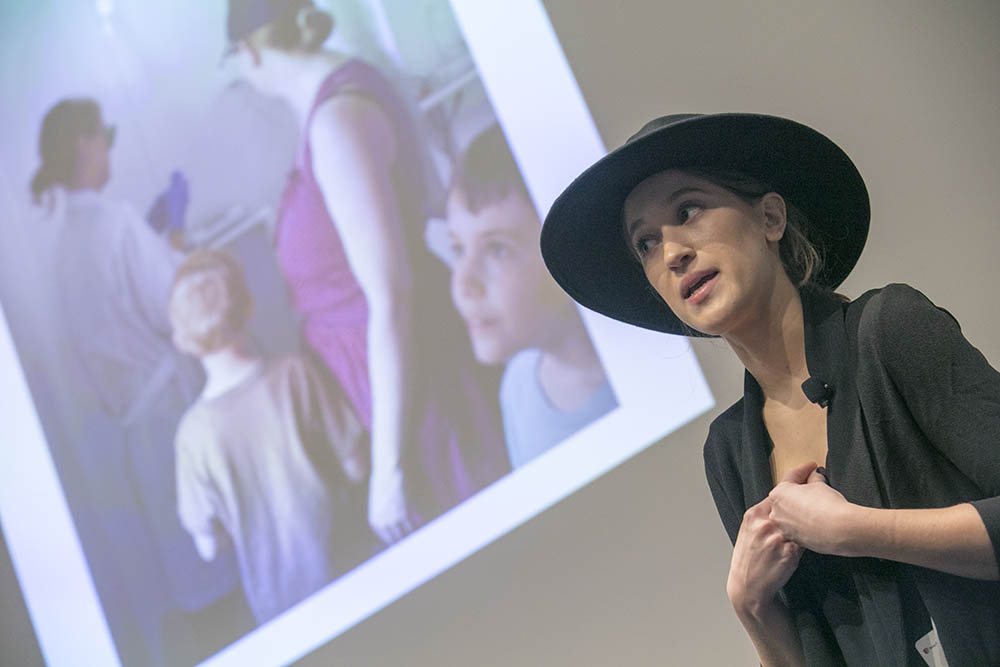 Department of Art’s Lauren Ruiz gives her presentation “DNA and Disposables: Nothing Disappears”.

The idea for the 3MT competition originated at the University of Queensland (UQ) in Australia in 2008. At that time, the state of Queensland was suffering severe drought. To conserve water, residents were encouraged to time their showers to three minutes, and many people affixed a three-minute egg timer to the shower wall. The dean of the UQ Graduate School took that recommendation a step further by bringing the concept into the classroom, and the 3MT competition was born.
The goal of 3MT is to help doctoral candidates develop presentation, research and academic communication skills so they can explain their work effectively – both in school and in their subsequent careers. To put the challenge of the three-minute time limit into perspective, consider this: A typical 80,000-word PhD thesis would take about nine hours to present.
“We look at this not so much as a competition, but as an exercise in professional development,” said Kathleen Flint-Ehm, director for graduate and postdoctoral professional development in The Graduate School. “Stony Brook provides cohort-based training and coaching sessions to help participants connect with any audience. The training sessions leverage another unique resource at Stony Brook, the Alan Alda Center for Communicating Science, whose instructors coached students’ individual presentations.”
Alfreda S. James, assistant director for graduate students and postdocs in the Career Center said she viewed the event as “an investment in unseen, unpredictable futures,” adding that “the practice, refinement, and execution of speaking skills is an essential part of professional development.”
“With increasing numbers of PhD students entering private and public sector jobs, the need for jargon-free communication becomes critical to habits related to influence and success,” James said. “3MT is more than the promotion of scholarship, this event cultivates stamina, flexibility and an appreciation for sharing research to a broad community of listeners. The impact of 3MT 2019 competition goes far beyond the boundaries of this campus.” 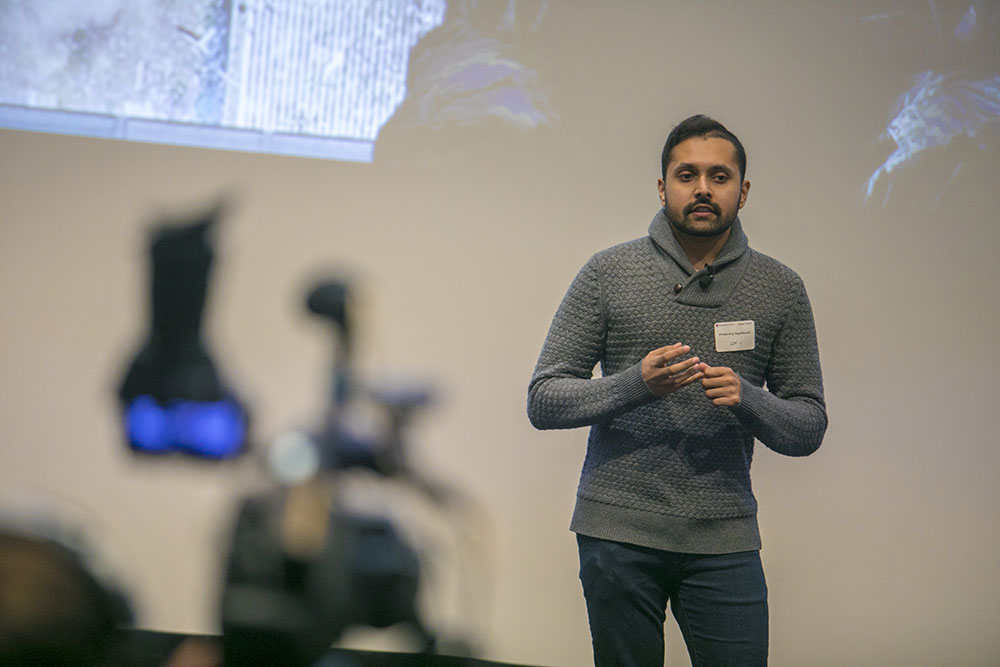 Prithviraj Rajebhosale of Neuroscience presented “Tracking Trauma in the Brain”.

Stony Brook has hosted 3MT competitions since 2014. This year 19 competitors took to the stage for their three minutes of pre-dissertation fame, representing research areas ranging from science and engineering to the humanities and arts. Two groups presented their individual theses to judges in separate lecture halls, and the top eight moved on to the final round to determine a winner.
Olivia Swanson, a PhD student in the neuroscience program, took top honors with a presentation titled “Brain In Motion,” which addressed brain activity and Parkinson’s disease.
“I have always been interested in how brain cells communicate with one another,” said Swanson, a Kings Park, Long Island native who earned her undergraduate degree at Boston University. “Upon joining Professor Arianna Maffei’s lab at Stony Brook I was offered the opportunity to study brain activity as it relates to Parkinson’s Disease. It seemed like a natural fit for me and I was able to combine all my interests into a project that is very relevant to public health and medicine.”
Swanson said the most challenging aspect of the 3MT presentation was striking a balance between accurately explaining the details of her work and making the content of her talk relatable to the audience.
“It’s very difficult to faithfully represent your project while avoiding jargon or information overload,” she explained. “The training sessions turned out to be the most valuable part of this experience. My group had graduate students from a diverse set of departments beyond my own, including English, Health and Rehabilitation Sciences, and Art, and the perspectives of these graduate students were invaluable.”
Xiaoyu Zhao, a PhD student from Molecular and Cellular Biology was named the “People’s Choice” winner for her presentation titled “Social Network of Cancer Genes.”
“When I decided to participate, I told my advisor that I was working on basic science but I really wanted to let others know that I am also doing something good for society,” said Zhao. “For me, 3MT is not just a competition; it’s a process of science communication. It not only helped me understand the importance of communication in science, it will help me explain my research to other people in the future, such as the granters, policy makers, students and others.” 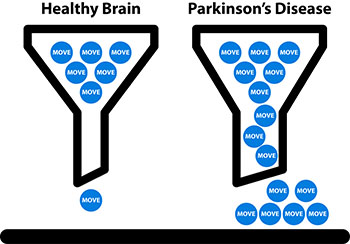 Competitors were allowed one slide to support their presentation. This slide was part of Olivia Swanson’s winning effort.

The presentations extended beyond the science world. Brian Hartwig, a PhD student in English, was a finalist for his presentation “Stage to Page in the Progressive Era,” which explored the literature and theater of late 19th and early 20th century New York City.
“My two passions in life have always been literature and theater, so it makes sense that my dissertation research combines these two interests,” said Hartwig. “I also think I was drawn to this period in history because of my family’s own stories of immigrating to New York City.”
Hartwig said the presentation he took to the first training class little resembled the final one he delivered at the competition.
“The most challenging aspect of putting together my presentation was trying to capture the scope and importance of my dissertation while still trying to engage a general audience using a specific anecdote that would exemplify the kind of work I do,” he said.
The Graduate School’s Flint-Ehm said that she was delighted to see an increase in the number of 3MT participants from last year, particularly in the arts and humanities.
“The cross-disciplinary conversations catalyzed by 3MT throughout our training sessions and at the competition are what make this event so special,” she said.
— Robert Emproto